How in the world did you come up with this?

That is the question I am asked most often... and it is a good question.  Like many of us, it was a rather twisted road, rather than a straight path.
My adventure started about 35 years ago.  I lived in LA at the time, and walked into a store at a mall nearby.  It was one of those stores, popular at the time, where they carried handmade items by various artists.  That is something that I have always been drawn to.

I spotted a display case with hand painted coins.  I had never seen them, and they were a little more expensive than I expected.  I was totally fascinated, and decided to buy one for myself for an upcoming birthday, or Christmas, or something.  That is how I usually justify buying the more expensive treasures.  My husband plays along and the gift is from him.  Great deal for both of us.

I returned to the same store about 6 months later to buy another one, and was told the artist had retired. When we made the move to Santa Rosa in Northern California a few years later, the coin treasure came with me but mostly sat in my jewelry box.  You see, as much as I loved jewelry in those days, I was not confident in wearing it. So most of the time I didn't wear any jewelry at all.

This is the painted coin that I purchased 35 years ago, and thought I had lost. 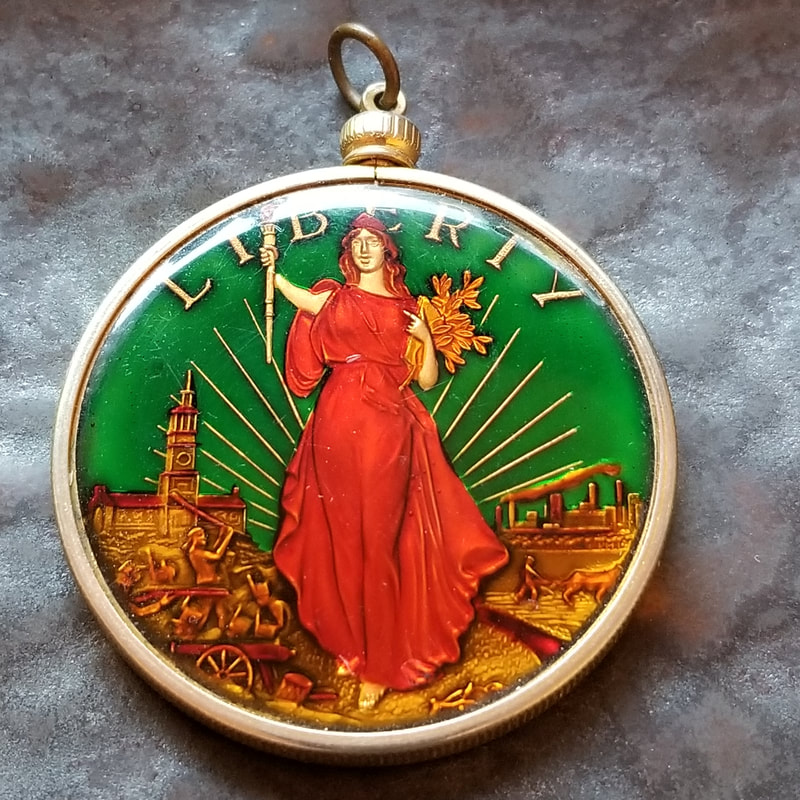 ...and this was the back side of that coin. 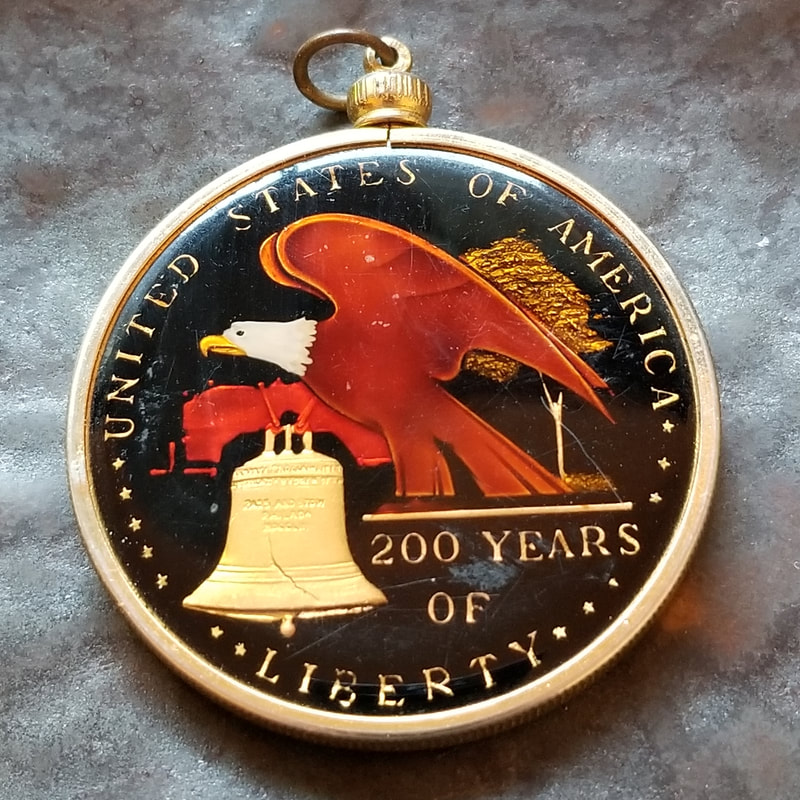 As our son got a little older, he announced one day that he wanted us to take him to a local coin show he had heard about.  We decided it sounded interesting, and he was hooked as soon has he saw all the cases full of coins.  So our whole family joined our local coin club, the Redwood Empire Coin Club.  At the first meeting we attended, they asked us what we collected.  Oh boy, I wasn't prepared for that!  So on the spot I decided I would collect coins with animals on them. Sounded good to me, but a few of the serious coin collectors gave each other a knowing look.  I don't think they thought I was that serious.

The first year we belonged to the club, they had a contest on the "most beautiful coin."  Members were encouraged to bring a coin and everyone got to vote.  Of course, I brought the beautiful hand painted coin.  I was new and didn't know that they meant the most beautiful DESIGN of coin, and then it got worse when all the kids in the club voted for my painted coin.  Oh well, once again I caused a little controversy.

We found the members of the coin club to be nice people and enjoyed everything about it.  They had monthly meetings, an annual coin show, and it often involved good good and deserts at the meetings. So when our son eventually went off to college, my husband and I remained members.  I eventually earned the respect of the other members as I continued to collect coins from all over the world and share the special finds with them. The members who traveled often returned with a coin or two with an animal on it for me.

After 15 years in the coin club, I was getting restless.  I hated the idea of all those beautiful coins sitting in the drawer.  I really wanted to find a way to share them.  Making them into jewelry was my first thought.  Unfortunately by then, I had no idea where the painted coin was that I had bought, and so I had to go from memory.  I also couldn't find anyone who could teach me, or any reference information on it.

I was already hand painting silk scarves and selling them, so I decided this could be another art adventure!

I was a "mad scientist" for 3 months...and many Buffalo nickels were sacrificed along the way. I used them to practice & experiment since they were cheap & I could buy rolls of them at the bank. 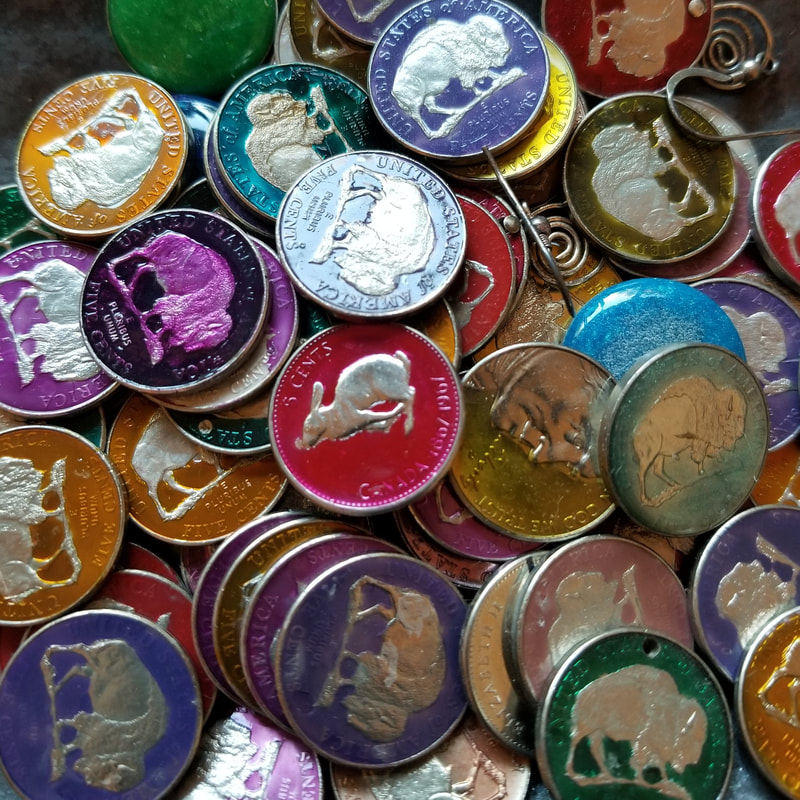 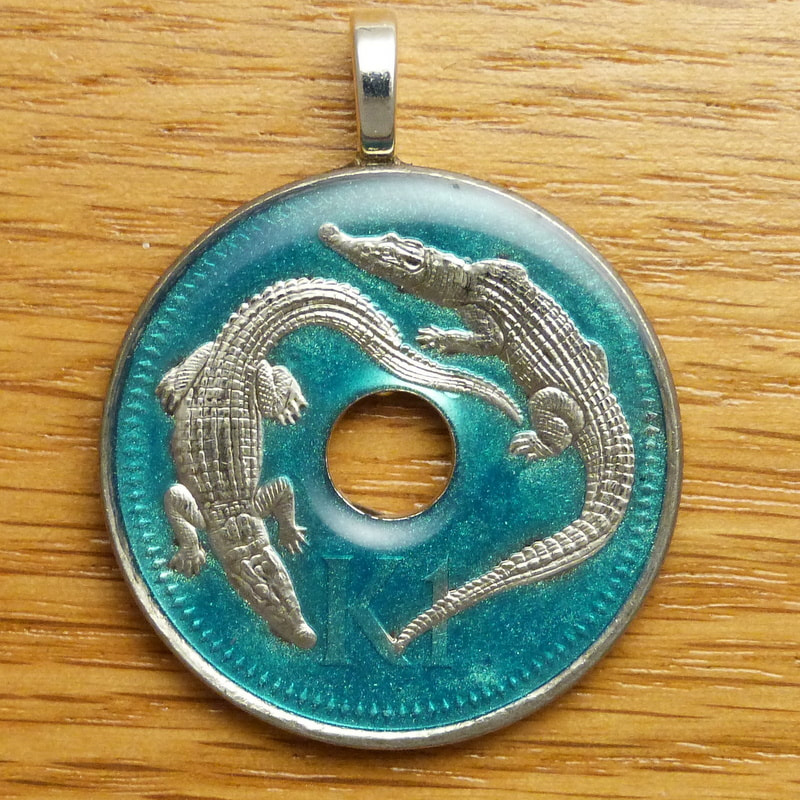 This is the first coin I successfully painted and offered for sale. Still a favorite coin of mine, it is from Papua New Guinea and features 2 land and sea crocodiles.
So, the biggest challenge was that there was no one to teach me how to paint coins, AND nothing was sold at the art store that worked.  I basically went to the art store every day and bought something new to try.  Glass paint required baking, and the coins turned dark.  Other paints wouldn't stick to the metal.  Other paints were too opaque and I wanted the metal of the coin to shine through. Fortunately I can be stubborn.

Finally, I figured out to blend the paints, with each color with its own recipe, and then the serious practicing began.  When I was pleased with the results, I started building an inventory.  At the first show that I sold both my silk scarves and the hand painted coins, I mostly sold coins.  The silk painting was enjoyable but I paid almost as much for the supplies as I sold them for.  So I didn't waste any time making a change to coin jewelry in 2009.

The next step was to build a website so I could start selling online.  I was surprised to receive an email from a man in Australia who had noticed my website.  He also painted coins, and welcomed me to the "club."  He told me that there were only 6 people in the world doing this type of art, and I was the only women. No wonder I couldn't find any information on painting coins!

Just recently my son, now an adult with his own family, asked me if I would like the painted coin back I had given him years ago.  No hesitation, yes!  I didn't remember that I had given it to him years ago for his coin collection. but it sounded exactly like something I would do.  Now the coin sits in a place of honor in my art studio. A reminder that this was the seed planted that started me down the path towards hand painting coins myself.  My dream had come true.
Painting coins in my studio.  Notice that I still had my painted silk scarves in the studio. 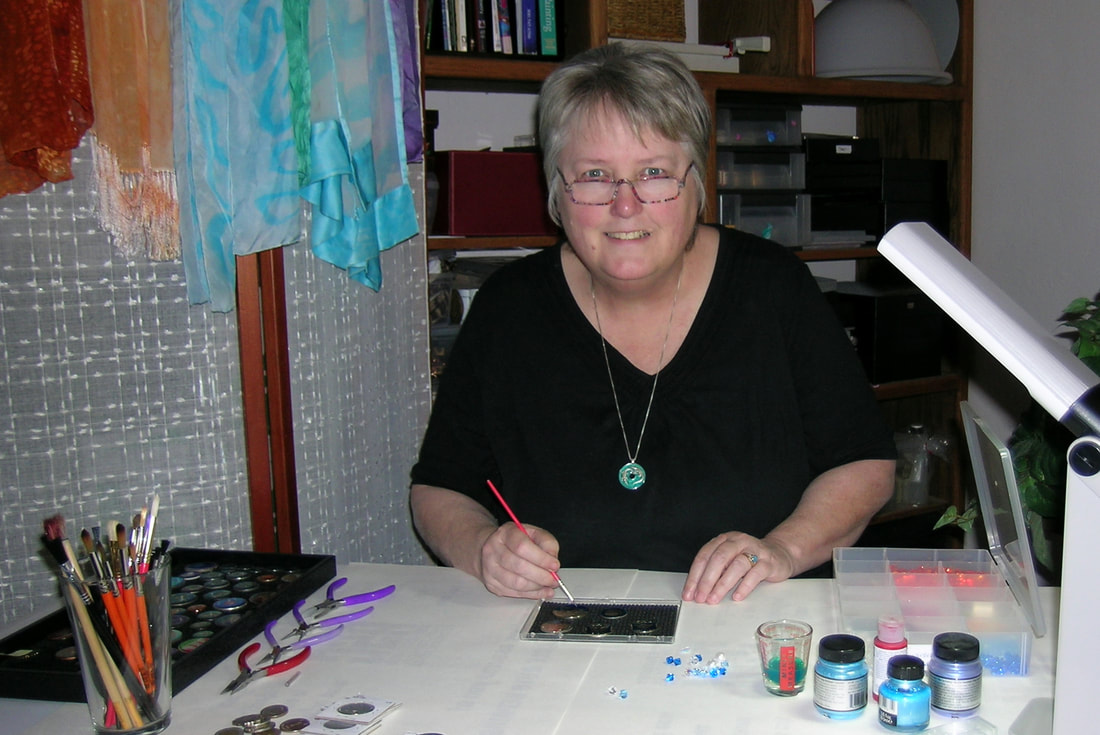 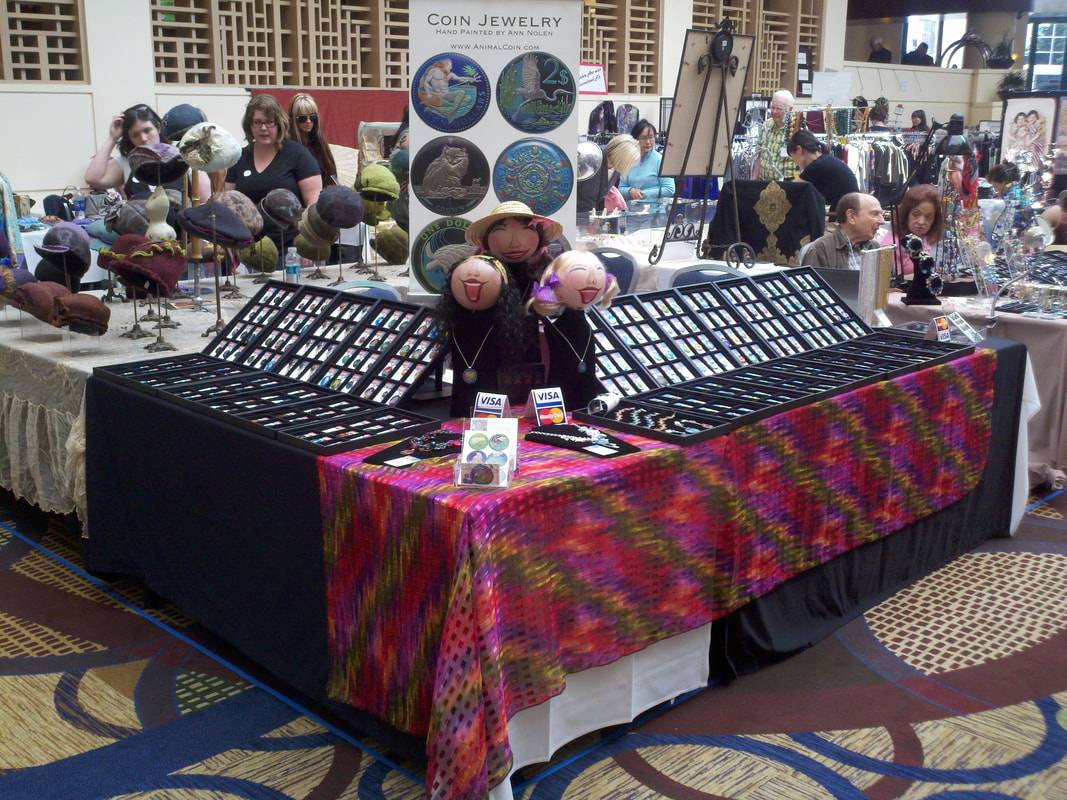 My booth at the first big art show in San Francisco.  I was so excited to be there!

I welcome your comments: