Two lives that definitely needed saving.  These two little guys came to me at 2 days old.  I was told they actual came in to the shelter at 1 day old, but the foster who originally took them returned them.  Too hard, and too much.  Fortunately, I have lots of experience and am also pretty stubborn... I wasn't sure that was going to be enough in this case. 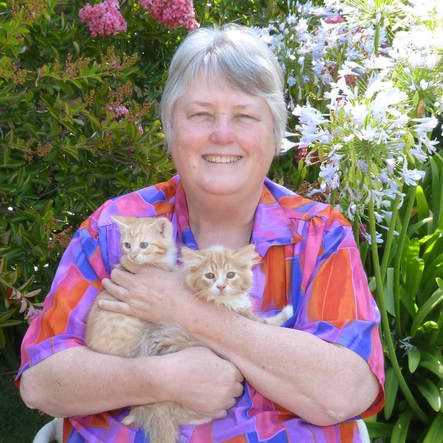 Peanut & Butter at about 10 weeks old and
ready for their forever homes.
Kittens this young are never guaranteed to survive.  I overheard someone saying they didn't think these two kittens would make it.  They were so young and there was concern they had never nursed. That gives them their antibodies for the first month of their life.  A huge disadvantage health wise. Despite the odds, I was going to give them the best chance I could.  It turned out to be a lot harder than I expected.

Little Peanut was the toughest foster kitten I have dealt with.  He made it, but there was one day that I admitted to my husband that he was so miserable, I wasn't even sure I liked him.  Wow, I couldn't believe I said that out loud, let alone think it.  In the meantime, his brother, Butter, was the sweetest kitten and purred any time I held him.  By the way, Butter couldn't stand Peanut either.  Hard to love someone so miserable. 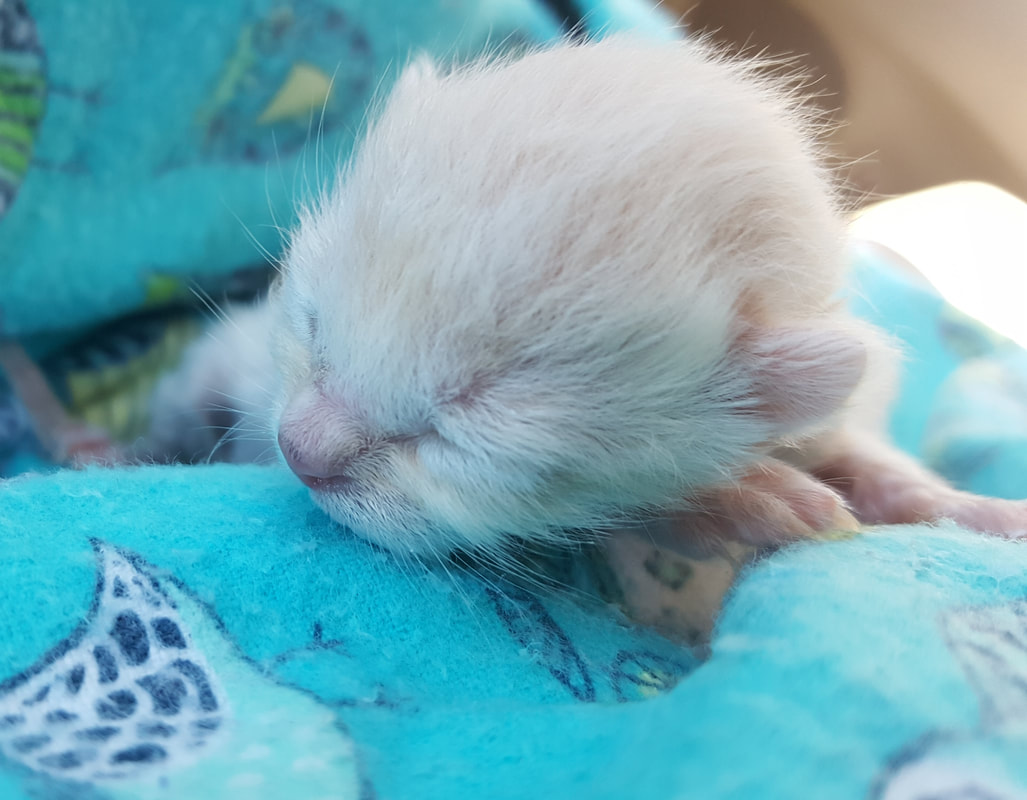 At 2 days old, Peanut was very tiny and medium length white fur. His appearance would change dramatically. Peanut was underweight and crabby all the time. 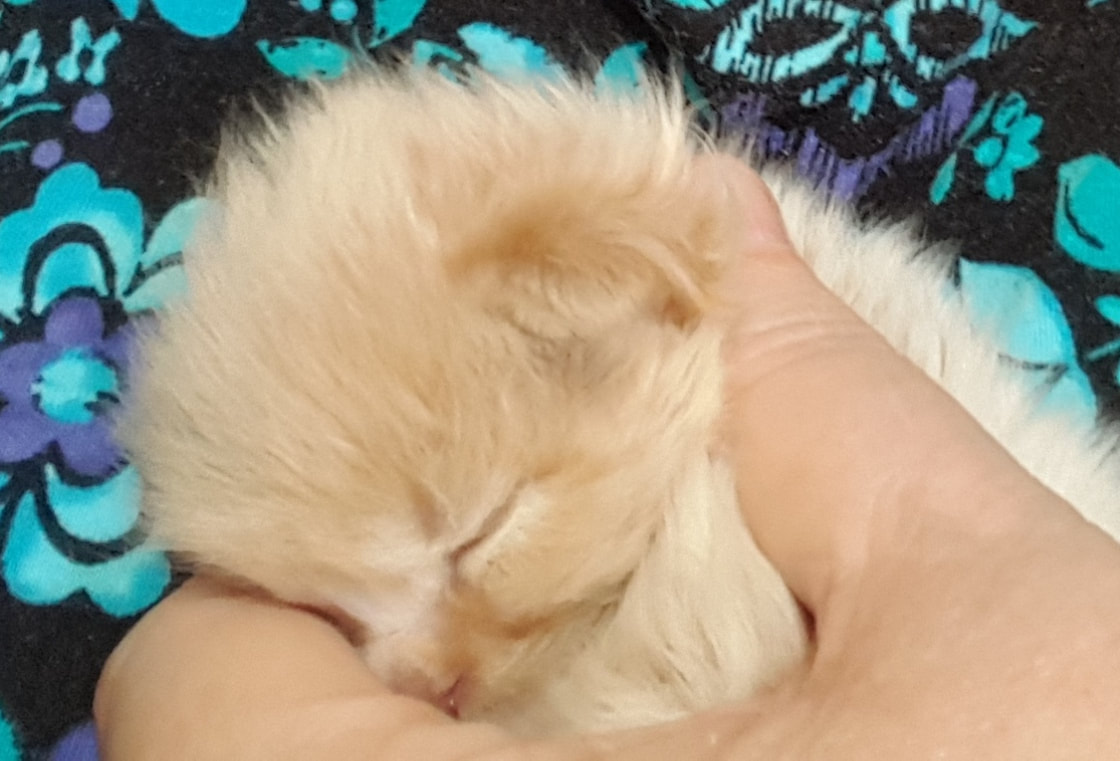 Butter was twice the weight and size of little Peanut, and a soft cream color.  He also had very long fur.  He was obviously going to be a beautiful cat some day, and was already a very sweet baby kitten. What a love.
I am rather proud of how well I usually can get my foster kittens to sleep at night.  I feed them lots right at my bedtime, make sure their crate is toasty warm with a heating pad, and put them next to my bed so I can hear them.  They usually sleep all night, even at a few days old.

Not these two... For the first time I was dealing with kittens that woke me up every couple of hours.  They weren't always hungry, sometimes they just wanted to be held.  They were breaking my heart with how needy they were, but they were also making me a walking zombie.  I don't function very well without sleep.  Thank heavens for power naps!

Little Peanut was really struggling.  Butter was doing much better, but if Peanut was crying, then Butter started to cry too.  I had my hands full with two kittens that just couldn't get along. 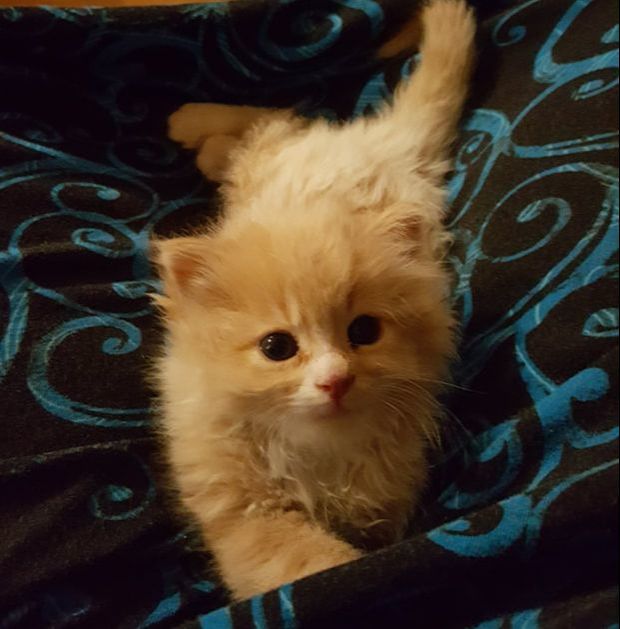 Butter was growing into a handsome guy.
Luckily, most of his problems were typical
for such a young kitten and pretty minor. 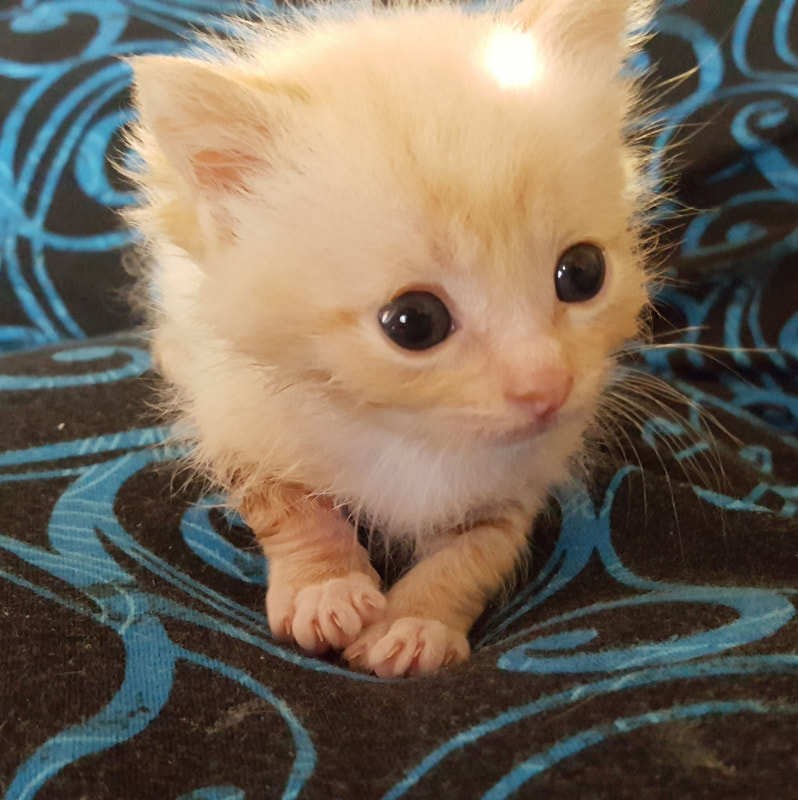 Peanut was very slow growing and seemed to have one problem after another.  He was so tiny and pathetic, he was actually kinda cute.  If only he was nicer!
But then over time, things got better for little Peanut.  Even though he was still very small for his age, he was getting strong and healthy.  Even better, he became a sweet kitten.  He relaxed and could hang out with me, and be sweet.  He could sleep all night and was eating well. What a change for the better.  I had to change my mind, and admit he was a very lovable kitten that I now enjoyed.  His brother, Butter, didn't agree with me right away, but they eventually became buddies and liked to snuggle & play together.
At a little over 4 weeks old, my little miserable Peanut became a sweetheart!  He also developed ginger stripes and lost his longer white fur.  Overnight he was a different kitten in almost every way.  Yeah! 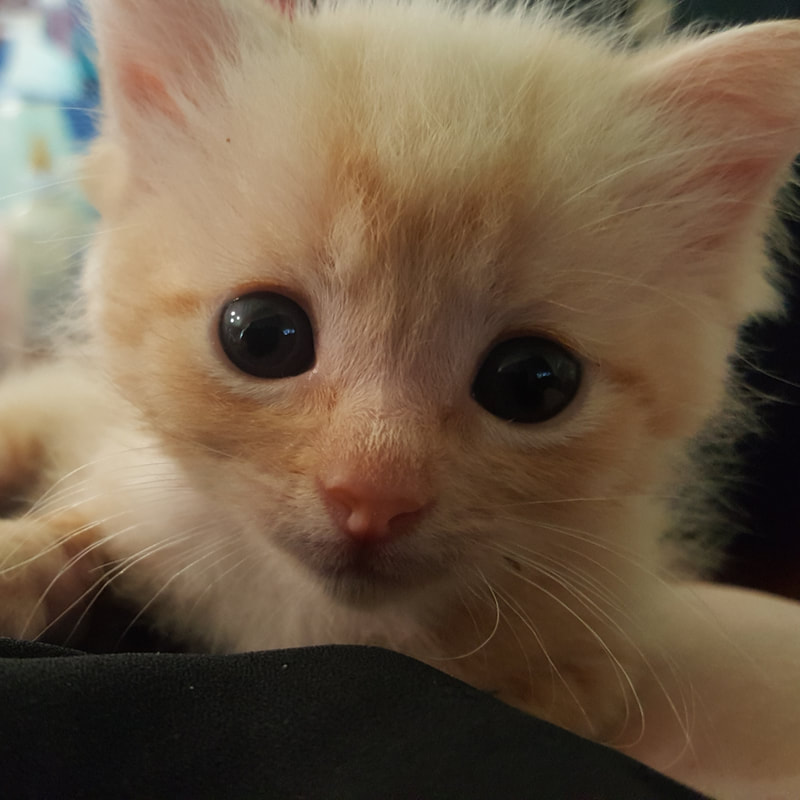 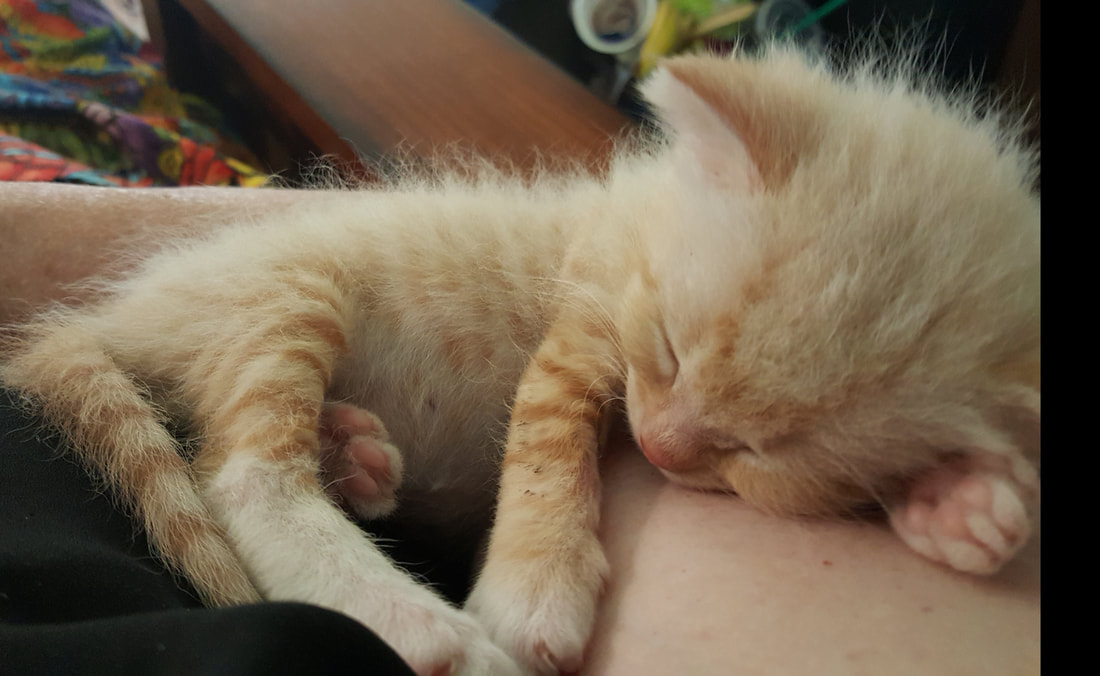 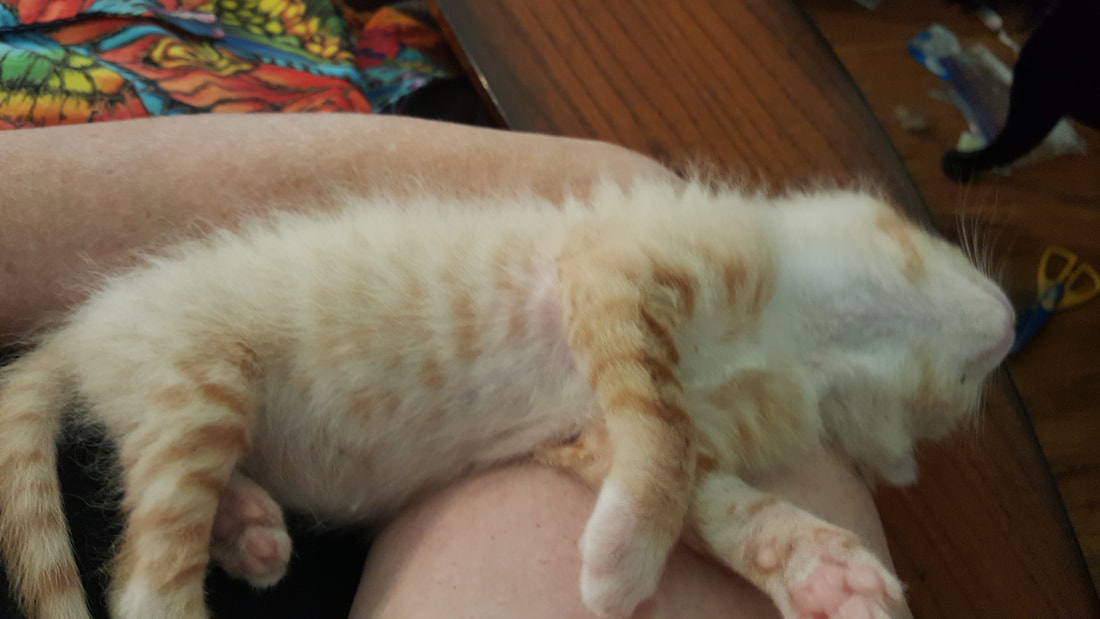 And then there was big beautiful Butter.  My heart was really in trouble with this little handsome guy.  He was exactly the type of cat I am drawn to.  Long fur and he loved to cuddle with me.  In fact he kinda looked like a tiny sheep with all the fur he had.  Oh my, my family was teasing me on whether I was going to end up adopting him...
Butter just kept growing and getting more fur.  He looked huge, but weighed in right on target for his age.  He just looked big next to his brother.  All that fur didn't help either! 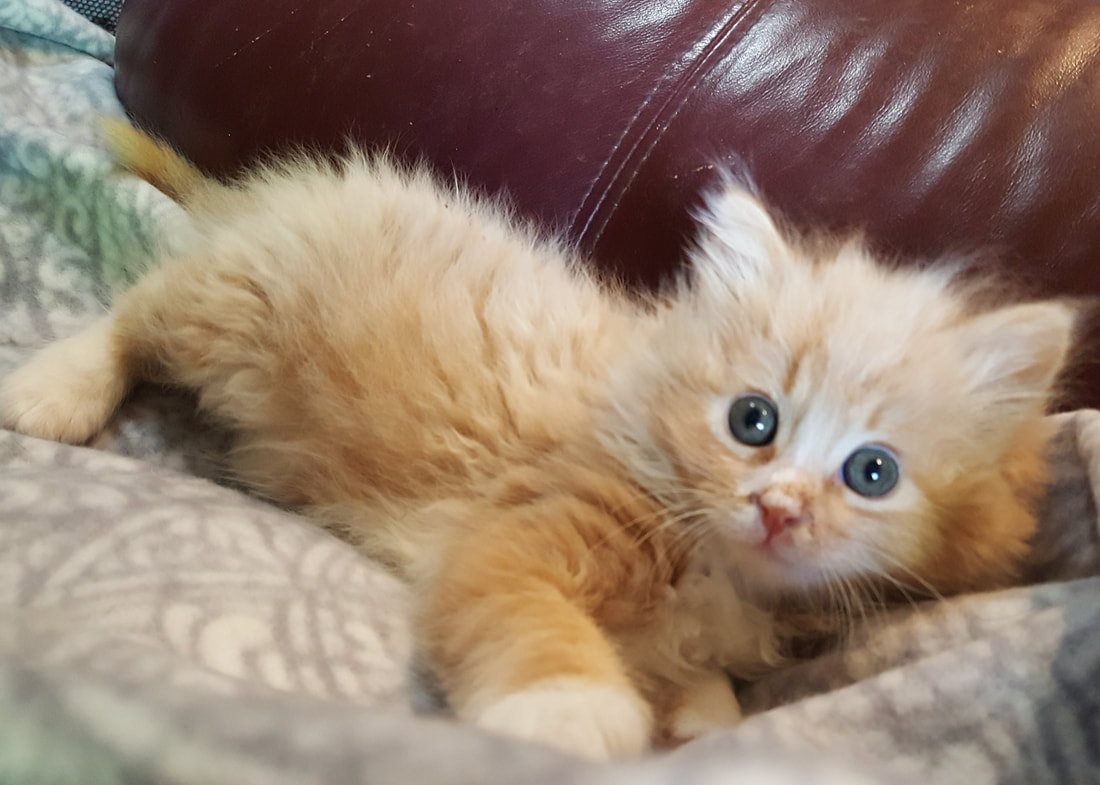 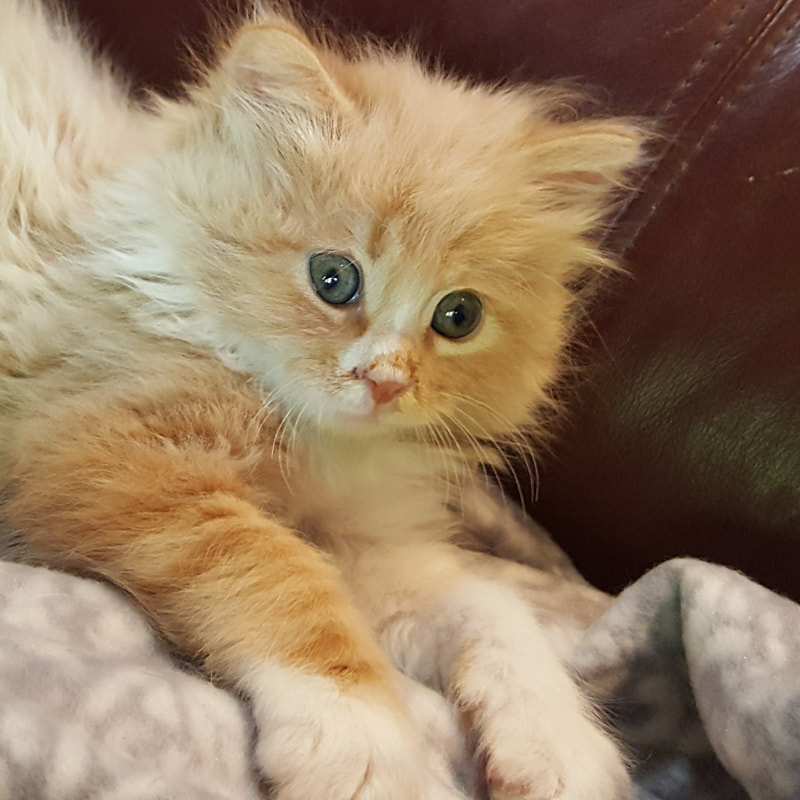 Once Peanut was doing well, he and my tiny dog Button became playmates. No peace & quiet for Button any more!  Peanut love to surprise her with sneak attacks. 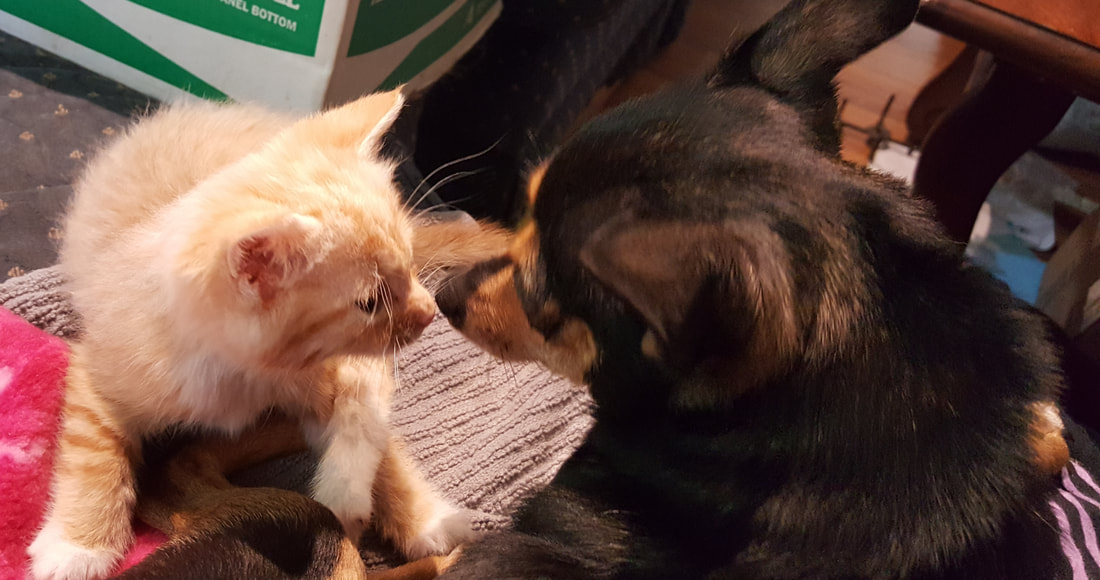 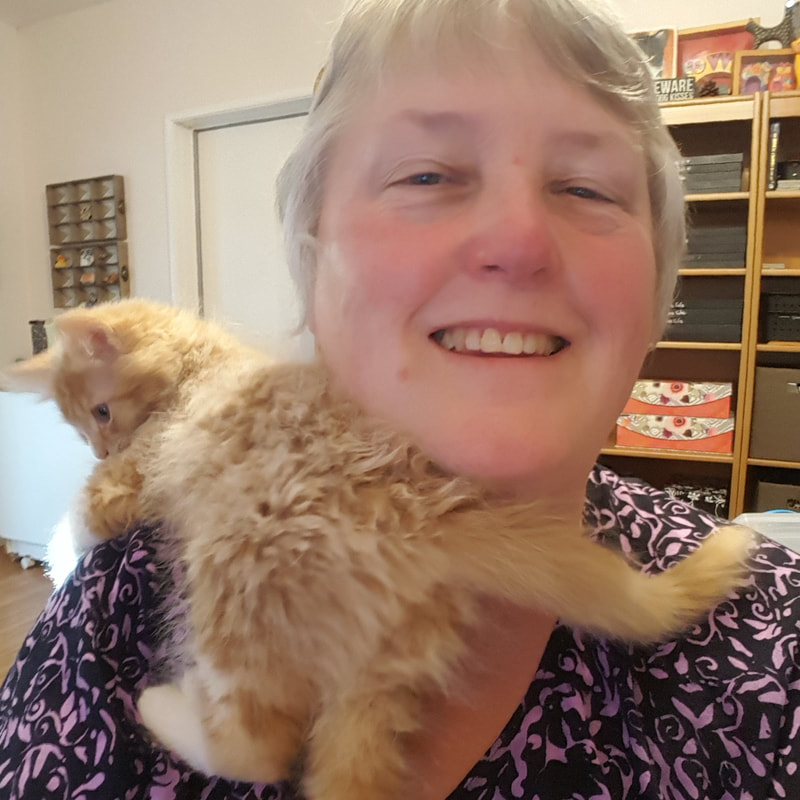 Butter thought I was his playmate, and often "helped" me with paperwork.
In the end, I made the decision to take both kittens in for adoption by someone else.  I really had to reflect on why I foster these little kittens.  I already have quite a few pets, and I was concerned that if my house got too full, I might not have the time to keep fostering kittens.  I remembered that my original mission was to raise the sweetest and most lovable kittens for someone to adopt.  It also helped to know that  Sonoma Humane Society does a wonderful job of finding good homes for the kittens.  I like to think it is my way of sharing love in the world, one kitten at a time.